Over the last year there has been article after article on the subject of declining reach of Facebook pages.  For businesses that invested heavily in developing their page, working hard to acquire fans and posting religiously this has been a hard pill to swallow.  Facebooks response to the criticism has been to explain that with the popularity of the platform and the growth of Likes it would be impossible to post everything so they have developed an algorithm to determine which posts will be sent to which fans.  Sounds simple right?  Well, as a business that has developed a fan base that they have worked hard to post engaging content to convert those fans it is not so simple.  True, there may be many of those fans that are not our ideal customers but how will Facebook determine which are our customers?  The answer is that they won’t.  They will decide which ones are fans that are engaging based on what is best for Facebook, not for your business.

So just how severe has this decline been and how will it impact on you as a business?  Let’s look at some numbers that were published in an article by Cotton Delo in March.  In the article they looked at the decline between October 2013 and February 2014.  For all pages the decline was from 12.05% in October down to 6.15% in February.  Put simply this means that if you did not increase your fan base during that time you saw your reach cut in half; and Facebook decided who that half was!  If you had a fan base of 100,000 and saw it increase to 200,000 during that time period you actually saw no increase in your overall reach.  These numbers are a significant drop from late 2012 when Facebook reported that overall reach had dropped to just below 16%.  Of course you can always increase that reach by simply paying for the increase.  Facebook is quick to tell us that it is not about money.  Right!  Just do a quick Google search for Facebook’s Rising Stock! 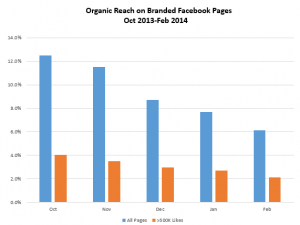 An even bigger issue than the drop in reach is Facebook’s deciding who sees my posts.  As a business, I have carefully reviewed my Facebook Insights to determine the demographics and developed my posts to appeal to those that most closely match my ideal customer based on their age, sex, location, etc.  These are the fans I want to see my posts, not the ones Facebook decides are the best for reaching their goals!

So what is the answer?  To begin with I am engaging in removing my business from the “digital sharecropping” mentality.  I no longer will post my content on someone else’s property.  I make greater use of my blog and use my social media platforms simply to distribute that content.  My writings, my videos, my images are no longer going to become Facebook’s property where they reap the rewards of how popular my content becomes.  My postings on Facebook will continue at the same level as before but they are now simply snippets with links to my content.  With the continued growth of Facebook and the number of posts daily it is estimated that at some point their reach will approach 0%.  At that time I do not plan to have all my valuable content sitting on their platform when the Facebook declining reach hits that point.  I only hope other businesses are heeding the warnings and making plans to control their destiny.